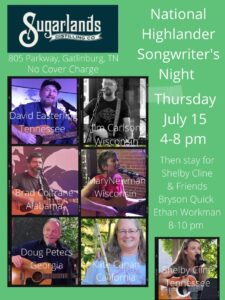 Jim is excited to play one of his favorite distilleries in Gatlinburg, Tennessee, as part of the National Highlander Songwriter’s Night.

Although Jim Carlson is best known as a solo performer (acoustic folk/rock singer/songwriter), he’s also known for his support of other acts. He’s lent his guitar, voice, production and songwriting skills with artists ranging from acoustic to punk, country to classical, and bluegrass to jazz. You’re on his site, now.

David Easterling is an Americana singer/songwriter/storyteller living in Oak Ridge, TN. He has recorded 6 CD’s of original music.  He has performed at festivals and many venues as diverse as Madlife in Georgia, Moonlight on the Mountain in Alabama, Stones Throw in Wisconsin, Capones in Indiana, Iron Horse in North Carolina, and Sugarlands in TN. You can contact him at www.davideasterling.com

Doug Peters is a lawyer by day and a singer-songwriter by night. His music is straight from the heart and simple. Doug says his music comes from “the kitchen table…that’s where I make it and that’s normally where I play it.” Others have described his songs of life, love, and adventure as “tugging your heart string and tickling your funny bone at the same time.”

Native of the South and citizen of the world, Brad Coltrane is a story-teller-in-song.  His day job as an English teacher keeps him in tune and out of trouble.

Kate Canan plays an eclectic assortment of music from medieval to the song she wrote yesterday, on flutes, recorders, and Celtic whistles. Her songs tend to deliver messages cloaked in humor. More about Kate: https://eclectictutor.wordpress.com/

Mary Newman has her degree in music therapy and has extensively studied how music transforms lives. A classically trained violinist, Mary also plays a mean fiddle, is a multi-instrumentalist and is noted for her traditional gospel and old country music roots.