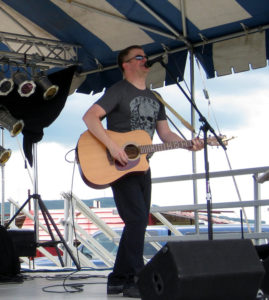 Performing at the French Creperie, [North side of Carnes Ave. between Nelson & Underwood Streets] from 3pm-6pm.

Singer/Songwriter Jim Carlson first performed at the Minnesota State Fair in 2016 and has been invited back each of the last two years for encore performances. He will also appear on this same stage both  August 28, 2018 and August 29, 2018.

Jim brings a rich catalog of original music from his Out of Fashion and Past Due releases, as well as new music from his forthcoming CD. Additionally, you can always count on Jim to to play covers from both modern rock, folk and roots country artists.

No cover for this show, but general fair admission is required.